I want to preface this quick story by saying, every time I go fishing, no matter where, my 90 year old father-in-law asks if I caught swordfish, as it is his favorite fish to eat and sadly, I let him down each time, although there are not many swordfish caught in the bay…..

This past Friday afternoon my friend, Capt. Jimmy Zavacky of the Reel Determined, asked me if he could pick up some bait for an offshore trip and, would I like to join him. After some discussion with my boss, my wife Carole Ann, I eagerly accepted his offer. We left Saturday afternoon to head to the Wilmington. Onboard were myself, Capt. Jimmy, his son Patrick and Capt. Ray Lopez. 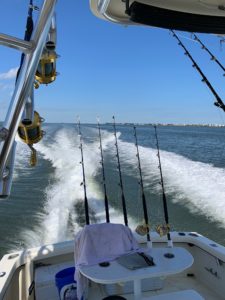 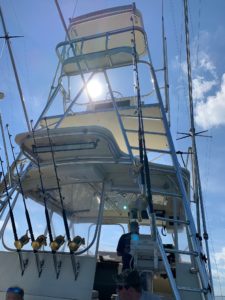 We had an uneventful, but nice trip out. The Reel Determined is roomy and very comfortable. It rode nicely and the conditions were smooth, very nice ride. Once on station we began to trawl for tuna until dark. We hit into mahi almost right away, catching several. 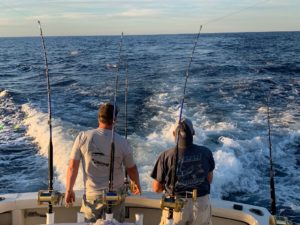 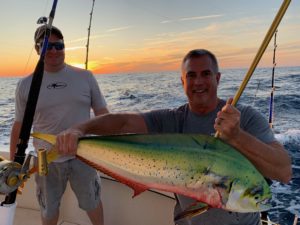 After catching a handful of mahi, Capt. Jimmy and Patrick selected a spot to begin a drift for the night. That was when the next stage of fun began.

We set several lines and began to wait. It did not take long, and a line came alive. Capt. Ray jumped on the rod and began to work. After a fun, but relatively short fight, he and Patrick brought in a nice swordfish. We quickly ascertained is was a keeper and into the box it went. 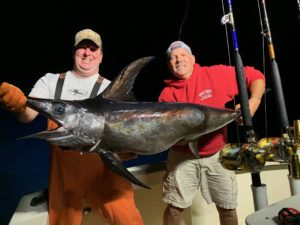 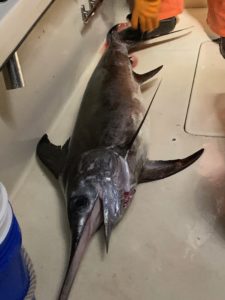 It was very exciting indeed.

The rest of the night was beautiful. Capt. Jimmy scooped up one of the squid that were all around the boat and used it to live line. Dolphin were all around us, stealing the morsels of chum pieces we were throwing off the back of the boat. Patrick broke out an electric grill and we feasted on steak and mashed potatoes.  It was incredible to be out there for the night. The ocean was gorgeous and the stars were amazing. I finally had to shut my eyes and headed down to a berth and slept for a few hours.

I awoke to the engines running and we were at it again trawling around the lobster pots that were lined up across the Wilmington. Mahi were again abundant and we almost filled the box with them as we went for Big Eye tuna.

Capt. Ray, once again grabbed a rod that was screaming and began working. He quickly realized that he was on more than a mahi. After some work, he landed a big wahoo. Patrick quickly and efficiently “subdued” the fish so no one would be eviscerated by the wahoo’s exceptionally dangerous mouth and into the box it went. 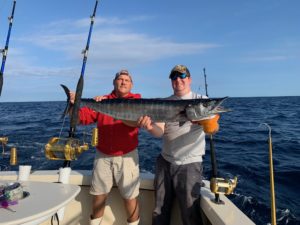 No fishing trip would be complete without “The One That Got Away”. Things had quieted down after the wahoo was put away. Again Capt. Ray jumped on a screaming line. I put on the belt and he helped the pole over to me. I quickly ascertained that I was not the man for the job, as something BIG was on the other end and was taking out line despite my efforts and did not want to be the guilty party if we lost this one. I tapped out and Capt. Ray donned the “harness” and got to work. The fish was smart and headed for a nearby lobster pot, wrapped around the line and broke off…..

Well, it was finally time to go and we enjoyed an uneventful ride back, with some heavy eyes, sleeping on the way home. We all pitched in to clean up the boat and gear and the Reel Determined looked ready to head out again on her next adventure. I was fortunate enough to watch Patrick Zavacky fillet all of the fish with surgeon like precision. There was PLENTY of fish to be split up amongst the four of us.

Thank you so much Captains Jimmy and Ray and Patrick for an incredible fishing trip. And Charlie, yes, I have swordfish for you!! 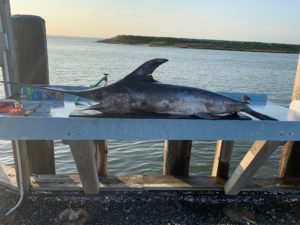